50 years of Yamarin - born to be a winner 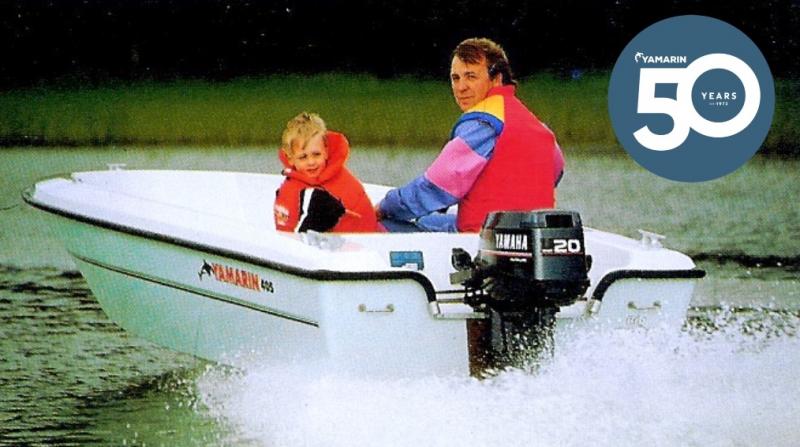 Yamarin was born from the desire to create the optimal boat for the best outboard motor by Yamaha. One that could be operated especially in the demanding Nordic conditions and would be embraced by boaters who appreciate quality. The end result was so successful that, in its 50-year existence, Yamarin has grown into an esteemed Nordic boat brand, which offers safety and comfort for tens of thousands of boaters throughout the Nordic countries and Europe.

Having started its Yamaha sales in 1965, the Finnish wholesale giant Kesko had seen strong growth in the Yamaha boat business, but did not yet have a boat brand of its own. Even back then, the customers wanted to buy an outboard motor with the boat as a ready package, and the outboard motor retail competitors had already got their hands on the most popular boat brands.

This meant that they had to find their own boat brand, and as the boats on the market were found to be lacking in quality, they had to design one themselves. In 1972, Yamarin – a masterpiece of Finnish boat building expertise and a future export hit – finally saw the light of day.

As the new boat was meant to be sold with a Yamaha motor, from a marketing standpoint, it made sense to position it as close to Yamaha as possible. Thus, they thought of combining Yamaha with the word ‘marine’ to make the connection to the boating industry...
...and there it was, ready to use and easy on the tongue, as if waiting to be discovered: only a little simplification was needed – “Ya-ma-ha-ma-rine” was contracted into “Yamarin”.

The 1970s: the first genuine Yamarins

In 1972, the first original Yamarin models were created in the 380 and 420, which were four-metre-long open boat models equipped with consoles and a 25-horsepower Yamaha motor.

The first Yamarin Hard Top model was unveiled in 1975: 555 HT, which paved the way for Yamarin’s future HT successes. As the only Nordic walk-through model, it is miles ahead of its competition.

Already in the following year, in 1977, only five years after creating its own boat brand, Yamaha rose from a relative unknown to be the clear-cut leader in the Finnish outboard motor market, and it was there to stay!

The famous four-metre Yamarin 405 turned out to be a real hit. It was the first boat in its size category with a dedicated battery space, which allowed for the use of an electrically started outboard motor. It turned out to be a soaring success immediately following its creation in 1985, with a whopping 1,170 units sold in the year.

In 1984, the Yamarin line-up also got its own distinctive logo. The choice was based on deliberations on what could beat Flipper, an extremely popular boat brand at the time. The answer was an orca, which was then added to Yamarin’s logo.

The choice of a logo turned out to be the right one, as Yamarin became the most popular glass-fibre boat in the 1990s and, in the 2000s, it became the best-selling reinforced plastic boat in all of Yamaha’s European network.

The numerous new Yamarin models launched at the end of the 1980s, such as the 575 BigGame and 600 BigRide, sparked an interest among boat enthusiasts in this Finnish quality boat.

Various user groups, such as leisure boaters, people with cottages, fishermen and tender boaters, found their favourite from the line-up, and word of mouth brought positive publicity to the brand.

The image of Yamarin’s excellent operability and competitive quality for the price was also formed around the time.

The recession had not yet reared its head when Kesko Marine had its first real boost in export in 1990, which is when Yamarin’s export to Sweden, Norway and the Netherlands was first started.

The Nordic countries are a natural market for Finnish boats since the conditions, consumer habits, values and expectations regarding boat design and functionality are close to each other.

Yamarin quickly became popular among Nordic boaters who appreciate quality. Yamarin has seen particular success in Norway: at the height of its popularity, Yamarin was sold more in Norway than anywhere else.

Yamaha stores were a natural sales channel for the Yamarin line and, in the 1990s, Yamarin and Yamaha’s smooth cooperation awakened the interest of many European Yamaha retailers. In the 2000s, Yamaha finally became the best-selling boat brand in the entire European Yamaha network.

Nowadays, Yamarin is known as an esteemed Nordic boat brand sold across 20 countries from the Arctic Sea to the Mediterranean and from the Atlantic to the Black Sea. For years, over 70% of the line-up has gone to export, which means that the manufacture of Yamarin boats is beneficial and significant from the point of view of the national economy and society at large.

At the turn of the millennium, Yamarin also changed its side colour to dark blue from the previous turquoise. The shape of the logo was also changed along with its red colour, which was now replaced by gold.

The first new model of the millennium was the Yamarin 6100 BigRide. It was a new type of day cruiser equipped with a deck cabin, which turned out to be a particularly successful venture indeed, increasing Yamarin’s popularity and overall success in the export market.

This was the headline that was used in the Finnish Boating Association’s Nautic publication (6/2010) following Yamarin’s unveiling of their new aluminium hull Cross line-up. With its new line-up, Yamarin started its campaign to take its place atop the entire boat market.

From Kesko to Inha Works

In December 2016, Kesko announced its intention to sell its Yamarin business to Inha Works, and the transaction was finalised at the end of June 2017. Nowadays, the Inha Works selection includes three independent boat brands: the full-aluminium Buster, the reinforced plastic Yamarin and a combination of the two, Cross, which has an aluminium hull and a reinforced plastic deck.

In 2018, Yamarin’s largest model of all time was unveiled in the shape of its new impressive flagship, the Yamarin 88 DC, a model representing the new design language. At nearly nine metres long, the Yamarin 88 Day Cruiser provides comfort on boating trips for up to 12 people and has room for up to five people to spend the night in its two cabins.

The Day Cruiser line-up continues its successful tradition and, in 2020, the 63 DC and 60 DC were unveiled, representing a new design. Both models also come equipped with Yamarin Q smart displays.

Since day one, Yamarin’s boats have been outsourced to contract manufacturer partners, all the while never losing sight of the company’s own boat building competence.

The boats are designed in-house by the Yamarin Team, often in cooperation with familiar and respected boat designers or workshops. Famous designers of Yamarin boats include Eero Harilainen and Kai Ilmanen.

Yamarin – a boat with a history and a future

Yamarin is a boat that was born to be a winner. For 50 years, its line-up has combined traditional Finnish boat building competence with state-of-the-art design and manufacturing technologies.

The heart of Yamarin is in its superior operability. Yamarin provides its operator with perfect control, a pleasant trip for passengers and safety on the water for everyone on board.

Throughout its entire history, Yamarin has been a top choice. It is a durable boat with timeless design, quality materials and seamless compatibility with the world’s best outboard motor. When the needs change, it is easy to switch models, as Yamarin also has a high trade-in value. Yamarin is the Finnish market leader in glass-fibre boats.

For 50 years, Yamarin has been the choice for people who appreciate themselves, their friends and family as well as the environment around them. And so it will be in the future as well.